Protection from a rampaging Waimakariri

Environment Canterbury Chair Steve Lowndes discusses what the Waimakariri in flood would really look like, and whether our current protection measures are resilient enough.

In mid-November, heavy rain in the high country made for a rather spectacular scene as water raged through the Waimakariri braided river system.

Environment Canterbury’s river flow webpages and social media channels peaked as more than a few residents expressed concern about the possible impact of the river breaching its banks.

Had we been living a few decades ago, it’s rather likely that people across our region would have had wet feet. Floodwaters from the Waimakariri were sometimes knee-deep in the late 1800s and early 1900s. The Press reported that in the flood of 1868, Canterbury farmer T S Mannering rowed his boat into central Christchurch’s Clarendon Hotel, while water in Victoria Square was waist deep. In Fendalton and Merivale, things were much worse, with water a metre-high destroying houses and farm buildings, while in Kaiapoi the water in town was 1.5m deep.

Fortunately, those of us now living in Waimakariri, Selwyn and Christchurch have the benefit of decades of flood protection planning and works to protect us.

The recent event of 9 November was relatively minor, being a one in five-year return period flood. However, it highlighted the importance of the flood protection schemes to which our ratepayers contribute. In the Waimakariri, the river’s flow peaked at around 2000 cubic metres per second (cumecs). This was enough to flow up onto the river berms within the regional park, but water only just touched the bottom of the stopbanks.

I’m often asked if we have certainty that enough is being done to provide protection from the whims of the Waimakariri.

Early work, begun by the Waimakariri River Trust in 1922, established and progressively upgraded primary stopbanks. These stopbanks are now designed to handle over 5500 cumecs, which is a flood event with a 500-year return period, meaning that it is expected on average once every 500 years. This work included blocking and rerouting the meandering arms of the river, channelling them in one direction to avoid the frequent breakouts. Today, flying from Christchurch Airport, the original channels of the Waimakariri can still clearly be seen.

Many of the names we use today relate to the impact of this work. Think of McLeans Island, for instance, which of course used to be an actual island in the river. Remember the children squealing as you drive over that big hump in the road approaching Orana Park? That’s Cross Bank, which was built to cut the river off from the adjacent land. The Groynes? An engineering term for an erosion and flood protection structure.

Work continued in the following decades to improve the capacity of these stopbanks, and in the early 1980s further work identified that the relatively high risk of stopbank erosion was likely to cause a breach during a significant flood. It was apparent that the construction of a secondary stopbank system was vital.

About the Waimakariri Flood Protection Project 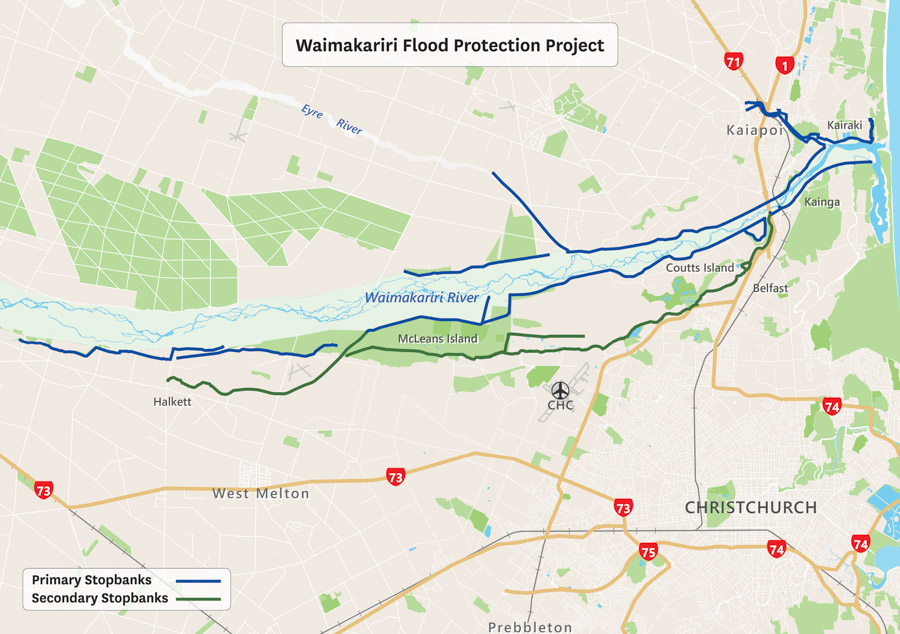 In 2009, Environment Canterbury approved construction of the Waimakariri Flood Protection Project, a suite of stopbank upgrade works including a secondary stopbanking system, to improve protection from a major Waimakariri flood. This 10-year, $40 million project builds on the progressive improvements made since the 1920s.

This project will be a year ahead of schedule when completed mid next year. By upgrading 35 kilometres of existing stopbanks, constructing rock armour to protect the banks from erosion, and retrofitting a 25 kilometre secondary stopbank system, the project has increased the levels of flood protection for residents across Selwyn, Waimakariri and Christchurch.

The project has been built to balance flood risk and ensure that protection is improved to residents on both sides of the river. The secondary stopbank system is designed to handle 6500 cumecs which is currently estimated as having a 1,000-year return period. To put this in context, our largest flood on record was just under 4000 cumecs, back in 1957.

The Waimakariri Flood Protection Project protects $107 billion worth of assets and will reduce the risk of flooding in the Waimakariri and Selwyn districts, as well as for Christchurch city. It adds strength and resilience to the flood protection system already in-place and means the risk of break-out during major flood events is very unlikely.

Still, how do we know that this system of primary and secondary stopbanks will be enough to protect Canterbury’s future residents as climate change brings more intense rainfall and larger, more frequent flood events? What about the risk of sea level rise causing flooding from the other direction? The truth is that even as this project approaches completion, our river engineers are beginning to plan for the next stage of improvements.

Today, however, it’s good to know that we’re protected by a total of 100 kilometres of primary and secondary stopbanks, much of that reinforced with rock armour to protect the banks from erosion. Environment Canterbury’s river engineers have continued the work of our forebears, and although that river may rage and threaten, the stopbanks are doing what they are designed to do, and Waimakariri, Selwyn and Christchurch have never been better protected.

*Featured image: The Avon floods central Christchurch at the Provincial Chambers in 1868

View all posts by: Steve Lowndes